I write spectacular blog posts nearly every morning in the shower.  Quippy, witty, ingeniously relevant tweets as well.  Too bad my computer isn’t waterproof.  By the time I’m sitting here at the keyboard I am the quintessential tabla rasa.  Just thought you should know.

This morning’s restroom ruminations were spent (once again) taking stock.  It’s been pretty quiet in my head lately.  Quiet in a good way.  I kind of envision the empty meeting chamber of my mind, devoid of my inner critics, echoing only faintly their old familiar taunts and jibes.  It feels good.  It feels better than good.  It feels powerful.

As I’ve said in past testosterone updates, my anxiety has definitely decreased and I continue to function with a lower and lower level of mental malaise.  The hyper-critical voices in my head, are for the most part, silent.  I do wonder over and over, “Is this how men think and feel all the time?”  Or was this just me?  Is it a symptom of estrogen that women question their every thought and motive and emotion and movement, behavior, appearance, interchange, conversation, etc?  Or was that just me too?  Is it only women who are bedeviled by the sense of inadequacy, plagued by imposter syndrome?  Or again, just me?  And if it isn’t just me, are these afflictions nature or nurture?

But I digress.  Suffice it to say that I’m feeling much more congruent and right in the world since beginning to take testosterone.  That’s not to say I’m living some sublime bliss.  I think Emily is a bit disappointed if truth be told.  Though she may not admit it, I think she expected me to start testosterone and be endlessly insouciant.  Or maybe that’s just what she felt was her due, a sort of consolation prize for having to deal with a transgender spouse.  The reality is that I’m too serious, responsible and anxious to be lighthearted all the time.  And even the most happy-go-lucky human being is still a human being, with all the ups and downs that constitute existence as such.  Whenever I am feeling down or grumpy Emily gives me that look that clearly says, “I thought you’d be happier on t”  I am sorry to disappoint.  But that being said, I’m genuinely and consistently happier now than I have ever been.

The physical changes are brewing if not beginning.  Small hairs are sprouting on the backs of my hands and arms where there has not been hair in the past.  They are small (infinitesimal really) fine, tiny hairs.  No one would notice them except someone who was microscopically searching for them.  Which apparently I am.  I’m finding myself fighting the urge to pluck the recalcitrant wiry hairs as they grow sticking straight up from formerly smooth hairless places.  I can’t seem to let go of the mindset notion of *beauty* that was drilled into me all my life.  There’s a new hair growing out of my chin.  One hair.  My fingers twitch for the tweezers.  That’s how you get rid of it.  And getting rid of it was ever the only solution.  Now I’m suddenly supposed to leave that sucker alone?!  You’re going to tell me that the hairs on my knuckles and tops of my feet BELONG there?!  Weird.  Then there is the, some might say adorable, tegument of downy fuzz on my belly.  Too bad Emily did not find it nearly as adorable as I did.  Also kind of too bad, it is jet-black.

I don’t see any muscle growth or change, but boy can I feel it.  I didn’t connect the dots at first.  I didn’t connect the dots until after I diagnosed myself with a rare and terminal illness.  Fortunately, I did make the connection (before I succumbed) that the intense, albeit random, muscle aches, spasms and pains were actually consequentially related to the testosterone.  Episodes of griping discomfort have not been that frequent, but they have been shocking.  Especially in the middle of the night when contractions have awakened me from a sound sleep.  It is easy to understand given the circumstances, that I might think I was dying.  Either that or I’m just your average run-of-the-mill hypochondriac.  Now that I know the muscle pains are from the testosterone, I’m waiting to see some results.  I expect any day now to wake up with six-pack abs.

I can’t tell if I look or appear or *seem* different to anyone other than myself.  I know I feel very different in my self and in my world.  I know I am navigating the space within me and the space around me differently than I ever have.  But I can’t describe exactly how.  I sense that I carry myself differently, feel differently and see the world through different lenses.  I can’t tell if the people with whom I interact on a regular basis see or feel or experience me as any different since I started on testosterone.  Those I have asked directly have said simply, “You’re just you to me”.  Though honestly, I haven’t asked many people and no one has offered any opinions on their own.  Though one dear friend and colleague told me recently that while she experiences me as me, she has found herself unconsciously (or is it subconsciously) changing pronouns for me.  Whoa.

Recently at work I had two strange but very similar experiences.  Both involved people who have not seen or interacted with me in the last 3 to 5 years.  A colleague of mine texted me to let me know a former family member (a family member of a former resident) was in our short term unit and was asking for me.  I remembered him immediately.  A devoted spouse who came to visit his wife every single day for the last years of her life.  He was gentle and kind and a faithful loving spouse who cared for her in so many little ways each and every day.  He was amazing and we all had a soft spot for him.  Of course he has had no reason to come back in the handful of years since his wife’s death.  But I know I’m not the only one who has thought of him with so much fondness often over these years.  Anyway, I was touched that he remembered me and thought to ask after me.  I went over to the unit where he was and found my way to his room.  I presented myself in his doorway and knocked lightly as I said his name.  He was sitting in a chair next to the bed and looked up at me with curiosity if not mild confusion.  “Can I help you?” he asked.  I walked further into his room assuming he wasn’t seeing me well and repeated his name.  Still, he looked at me without recognition and said, “That’s me. How can I help you?”  I said, “It’s me, Hali.  You asked the rabbi about me.” His face lightened and he said, “Oh yes, I asked about her.  She still works here huh?”  Confused myself, I said, “Mr. So-and-so, it’s me. Hali.”  His brow furrowed in utter incomprehension and he began to stammer confusedly, “No, I mean Hali.  She used to…. knew my wife…. she was…”  I may have tried a time or two more to explain who I was, but I could see I was causing this lovely gentleman distress, so I defaulted to a pastoral visit, asking about his convalescence and his spirit.

I chalked that interchange up to an elderly man, already compromised by illness and in a strange setting, being a bit befuddled.  But then a few weeks later that same colleague called to tell me another of her short-term patients was asking for me.  This one, the brother of a woman I worked with a few years ago.  I introduced myself  and as he turned to look at me a distinct look of unfamiliarity graced his countenance.  I said my name a second time and while he looked at me without even a pretense of recognition he responded, “Yes.  I wanted to let her know that my sister passed away.”  I was so taken aback at the news, the entire conversation shifted.  No longer about me or who I was, we talked about his sister and her family, shared stories and laughed with nostalgic sentiment at her eccentricities that endeared her to so many.  He wiped his eyes on a threadbare handkerchief as I said goodbye.  Halfway out the door I heard him say, “Don’t forget to tell Hali.” 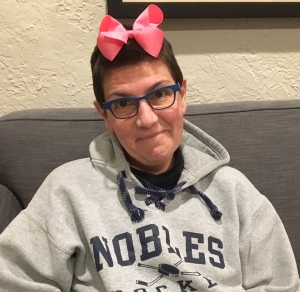 Looking for that one chin hair

How I see myself

i am. god is. we are. as soon as i write something about me i change, am different, evolving. i am trans. i am a parent. i am a partner. i am a human. i am attempting to live a well-lived life in the spaces in between, beyond definition, fluid, dynamic, omnifarious and always changing. hopefully growing.
View all posts by halitentwo →
This entry was posted in no man's land. Bookmark the permalink.