In a recent blog post I wondered if perhaps I might be *growing up*.  I’ve been wondering that a lot lately actually, whether things are changing for me (via either some inside or outside force) or whether I might just be responding to things with slightly more maturity and perspective.  Or, maybe the world is so batshit crazy right now that I just seem more evolved and *together* in comparison.  I’d like to think there is at least some small amount of deliberate intention in these changes, even if the majority of the reason for them is some intangible uncontrollable force.  I am 52 years old and that really is high time to be putting on the big boy undies.

I started this blog as a way to write about being transgender as one part of the life I live, a thread woven through and into the fabric of my life as a whole.  I also meant to include the other things in my life that make me who I am in the world.  In addition to being a spouse and a parent, I play sports and I cook and I love to take photographs and play music.  And lots of other things I dabble in.  If I’ve learned anything from the old folks I work with it’s the importance of continuing to learn new things.  And I’m very serious about the pursuit of new learning in my life.

Eight or nine years ago I ventured into the world of bread baking.  Well, more like that was when I first dipped a toe into bread baking.  A dear friend at the time gave me a bread machine she wasn’t using and I started with that.  We loved the product, but I wanted more hands-on involvement.  So I swapped a lesson with an acquaintance who was known to be an exceptional baker.  I gave her a lesson in soap-making and she gave me a lesson in bread baking.  What she taught me in our one session was the now-nearly-famous No-Knead-Bread recipe, made famous by food journalist Mark Bittman.  Again, not so hands-on, but more-so than the machine.  And equally fool-proof, I might add.  I went from baking that bread in a cast-iron skillet to baking it in a clay loaf baker Emily bought me as a gift, which made slicing it for sandwiches much easier, even if not exactly uniform.  Around that time I also discovered the King Arthur Flour website.

I played around on the KAF website and tinkered along with some of their bakers and recipes, as well as consulting their online chat feature.  The more in-depth and technical my questions became, the more advanced my breads got.  I began to ask the chat-chefs (repeatedly) when I could quit my day job…

Over these years I landed on and stuck with a specific basic sandwich bread recipe, tweaking it slightly to make it mine.  I bake a loaf every week or so and that has been the sole source of our family’s bread for these last 8-plus years.  I hadn’t realized how much this was the case until 2 years ago when we had our kitchen done, and because we had no stove, we had to buy store-bought bread for the weeks the kitchen was under construction.  When, after the first several days of Nina’s complete sandwich coming back home after school untouched, we asked what the problem was.  Nina said, quite seriously, “I’m afraid of the bread”  Laugh out loud!  The kid had never seen thin, consistent, fixed-slice store-bought bread before.  Parenting points for that.  Fear of uniform store-bought bread?  Minus parenting points.  At least I broke even.

Anyway, it’s now been another few years and I find myself wanting to take my bread baking to a new level.  From function to form, avocation to artistry.  As a frequent flyer at the King Arthur IP address, I learned that they were offering a scholarship to 2 people who wanted to “bring forth bread” so to speak, for the goodness of the world around them.  The scholarship was an all expense paid several day bread and pastry baking intensive at their Vermont location.  Room, board, the class, supplies, everything!  How could I not apply?!  In reality, I knew that I wasn’t actually even remotely qualified to win this prize.  They were asking for home bakers who go beyond their own homes and families.  Home bakers who regularly, or even sporadically, bake fresh bread for local shelters or fire-fighters or families in need.  I mean, I have been known to bake a nice olive oil rosemary bread for a new neighbor or for the caretakers at Ruby’s daycare now and again.  But the degrees of separation from my own home are seriously limited.  The *goodness* I put out being quite contained to my own orbit.

In another time in my life thinking along these lines might have put me in a self-scorning funk, reproaching myself for not being a good enough person, not being kind enough, generous enough.  But I didn’t go there this time.  That hyper-critical voice in my head has been torpid, lethargic, unenthusiastic as of late (definitely the T), and I am exceedingly grateful for that.

I didn’t get down on myself, but I also didn’t want to simply give up.  Rather than writing the scholarship essay about all the ways I was already “baking for good”, I wrote an essay about the ways I wanted to bring my baking into that realm.  I wrote what I considered a thoughtful, decent essay.  I sent my regular recipes and photos of my baking (requirements).  I was even a bit amused (if not completely self-satisfied or smug) that one photo of me baking included a bag of King Arthur Flour surreptitiously in the background.  With everything together in a neat virtual folder, I hit *apply*.

Uncharacteristically, I told friends that I’d applied.  And even though most of my being knew I would not get one of those precious two slots, there was a tiny piece of me that held out hope.  I was excited.  Not only by the slim chance of winning, but with pride at having taken that chance.  Something I definitely would not have done in the past.

I heard not long after, via a quite lovely email from KAF, that I wasn’t chosen.  I’m sure the letter was a form letter sent to each of the nearly 500 applicants.  Still it was nice (like the letter I received from Hilary Clinton in response to the letter I’d sent her after the fiasco of an election last year) and regardless of the fact that it was not a specifically special letter, I felt happy to have been acknowledged.  KAF also sent me a 5 dollar coupon for the effort of having applied.

I wasn’t shattered that I didn’t win.  For one, I didn’t expect to.  And for another, this seems to be the new imperturbable me, this is how I roll now I guess.  How cool is that?!  But I didn’t want it to end there.  I still had this desire to take my bread to a new level.  I checked out the KAF website to see their course list and schedule.  Vermont isn’t so far, I reasoned, and perhaps there was a one-day class that was inexpensive enough to splurge on.  I found, in addition to lots of learning opportunities at the King Arthur baking school, a host of on-line classes offered by KAF!  Not only was there no travel involved, the costs were dirt cheap!  After a bit of researching and my obligatory check ins with the chat-chef, I chose a class on sandwich breads.

I’ve been making my way slowly through the class, enhanced by taking books out of the library, and learning *baker’s math*.  I am loving every minute.  My spouse and children are impressed and enthusiastic about my new breads and my pain de mie is being gobbled up almost as fast as I can make it!

This still doesn’t address the other desire that was sparked by the KAF scholarship, however, to put more goodness into the world.  Now that we’ve entered a new year, I’d like to take my newly developing bread skills a bit further.  Further, at least, from my own hearth.  I live, as I’ve said in the past, in a fairly affluent city.  It’s going to take me slightly more effort to find a recipient of regularly home-made bread.  But that’s my January New Year’s resolution.  I’m going to bake for good! 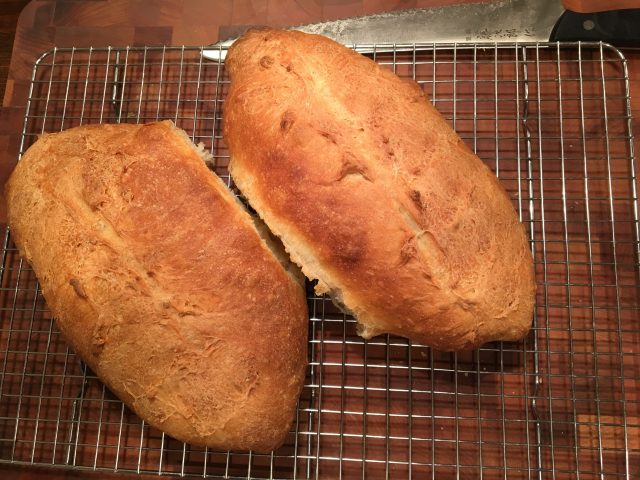 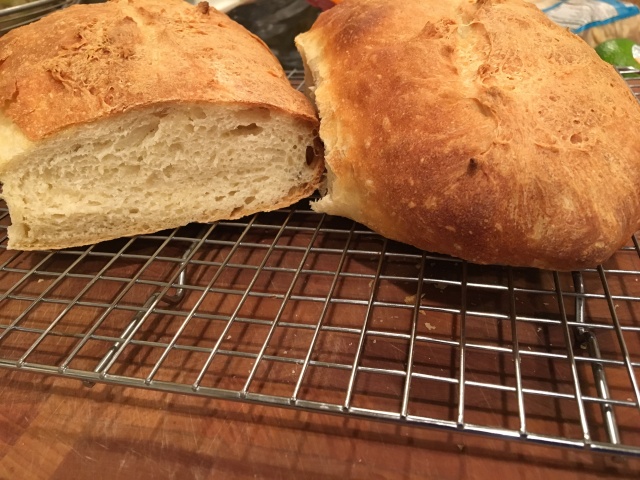 i am. god is. we are. as soon as i write something about me i change, am different, evolving. i am trans. i am a parent. i am a partner. i am a human. i am attempting to live a well-lived life in the spaces in between, beyond definition, fluid, dynamic, omnifarious and always changing. hopefully growing.
View all posts by halitentwo →
This entry was posted in blessings, everyday stuff, foodstuff. Bookmark the permalink.

10 Responses to learn your lessons well