We are told, more than once, in the Torah that if you see your neighbor’s ass gone astray you must do something to help.  Even if you don’t particularly like your neighbor.  Exodus goes as far as to say even if it is your enemy’s ass, you can’t just stand by and do nothing.  Loosely translated: “If the one who hates you’s beast is struggling under a burden, you must help.”

I had just wrapped up a 12 hour day at work.  It was Yom Kippur and I was completely spent, exhausted and slightly fried, having been standing, singing, leading services for more than 6 of those hours.  I literally stumbled to my car and slithered in.  I had driven no more than 3 blocks when some neighborly guy driving by rolled down his window, gesticulating to me that my front passenger-side tire was flat (I was so tired I hadn’t even noticed the uneven lurching of the car).  I limped dispiritedly straight to the nearest gas station (which was just closing and therefore unable slash unwilling to help) where I called AAA. 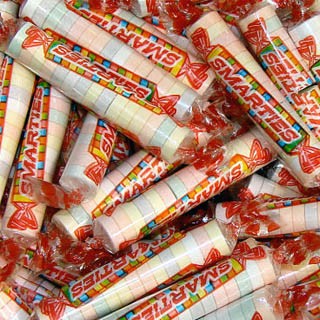 On the verge of becoming a complete and total hot mess, I was engaging every contemplative practice I’d ever learned in a rather feeble attempt to not fall apart.  I was tired and hungry and felt like I’d just done a graceless faceplant over the threshold into a new year.  A rather un-auspicious beginning.  The lovely folks at AAA told me I’d have about an hour’s wait.  Good thing I had smarties in my car to stave off starvation.

As the gas station attendant closed doors and turned off lights around me, I sat in the parking lot trying not to feel too bad for myself, making valiant attempts to convince myself that this was not a portent of the way this year was going to be.

As I focused on my deep breathing, meditating and envisioning calming waterfalls, a pickup truck pulled into the parking lot behind me and flashed it’s high beams on the back of my car.  It hadn’t been an hour, but I was hopfully sure it was AAA.  As I got out of my car, the truck screeched into reverse and shrieked into drive, pulling aggressively around my car, skidding to a dusty, fume-ridden, dare-I-say irritated stop in front of me.

A short, burly, kind of dirty-looking guy with a crew-cut and day old stubble on his chin got out of the pickup.  I was taken up short in my advance to introduce myself.  The look he gave me was pure malevolence.  And he took his eyes off me quickly, focusing on the tools in the back of his truck with forced intention.

Now, for full disclosure, the back of my car does say a little bit about me.  I have a Black Lives Matter sticker displayed prominently in the middle of the back of the car.  I also have a bumper sticker with religious symbols and the words “Prays Well With Others”.  These mark me as somewhat “liberal” I suppose, though I would say before this interchange I had not considered the ire those messages might engender in others. Stopping short at his abrupt exclusion, I considered myself for a moment.  In addition to the bumper stickers, I am also more than painfully aware of my appearance and the judgments and/or conclusions others may jump to at first sight of me.  On this particular evening I was wearing all white (my garb for the holiness of the day) and, as always, my large Bukhari-cap-style yarmulke.  Also, as always, I present as of indeterminate gender.  Not that he would have taken in all of that, given the studiousness of his disregard.  Just that had he taken in anything about me, these things might have stood out.  Perhaps I was someone he was not predisposed to like.  Still, I found his brusqueness disquieting. 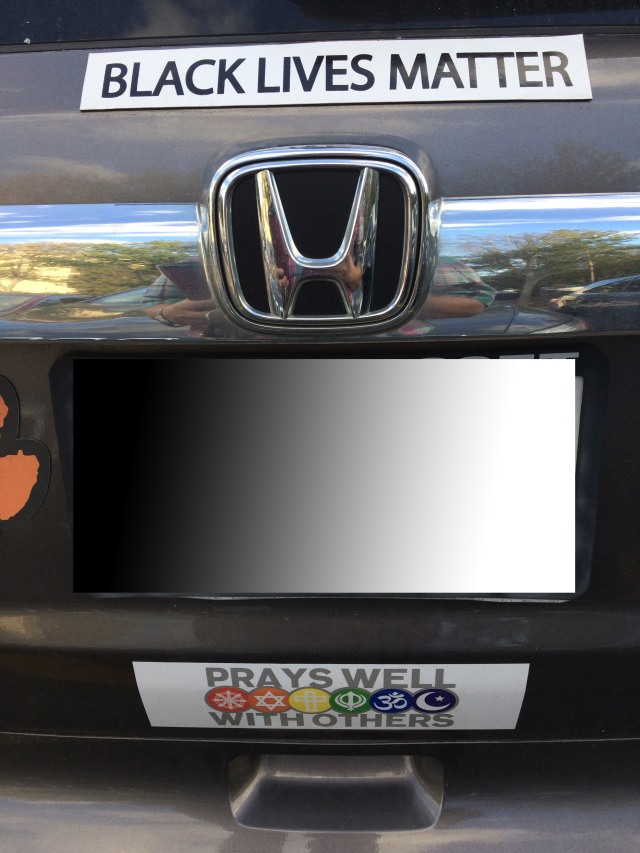 Having just been engaged in mindfulness techniques and exercises while waiting, I found myself in a relatively calm contemplative place.  So I noted my discomfort at what felt like being shunned.  I noted it, but didn’t feel compelled to act in any certain way as a result.  As I stood watching him work I tried not to let myself jump to conclusions.  Maybe he was just having a bad day.  Perhaps an even worse day than mine.  Or maybe he was a Trump supporter who viewed me with disgust as some crazy progressive bleeding-heart libtard.  I was definitely feeling more of the latter.  So much for not jumping to conclusions.  But you know when you get a vibe from someone.  And I was definitely getting a vibe from this guy.  So I texted Val.  I told her that if I were to disappear, it was likely that I’d been chopped up into tiny pieces and disposed of somewhere in the vicinity of where I currently was.  I described my current circumstances.  I can do that with Val, share my craziness without shame.

In the meantime, I was also keenly aware that typically I revert to a habitual response with men like this in these types of situations.  I tend to default to a rather pitiful, though no less valiant attempt at *damsel in distress*.  Laugh if you must, but it generally has the desired effect of diffusing the aggressive energy of the situation.  Somehow the damsel in distress alleviates any challenge to the authority or, gag, superiority of the person (usually a man) I’m engaging with.  I’m not saying I’m proud of this behavior.  I’m not.  It is a learned response that I think many women regress to in situations like this, whether they admit it or not.

“Not this time”, I thought.  I don’t know whether I was just too tired to play the fair maiden or whether the contemplation of the day and the time meditating in the car while waiting simply grounded me.  Either way, I did not engage in my familiar *womanly*(sic) ways.  I neither asked insipid questions nor chatted away inanely trying to connect.  Nor did I bat a single eyelash.  I simply remained quiet, leaning against the gas station, watching him work with discourteous compendiary efficiency.  He concluded by throwing his heavy tools with unnecessary force into the back of his truck with a loud clang.  As he walked around to his driver’s side door I said, “Thank you”, to which he may or may not have grunted.  And then he was gone.  I breathed a sigh of relief as I got back in my car.

I texted Val.  I told her I was safe and thanked her for being there yet again.  I wasn’t at all sure he hadn’t left the lug nuts intentionally loose and that I wouldn’t still end up skidding unceremoniously off the road into a ditch.  But for the moment, I was safe.  I wondered briefly whether he really was just having a bad day or whether he simply found me so offensive that he refused to engage with me at all.  For some reason, even if it was the latter explanation, I didn’t feel bad.  A new feeling in and of itself.  You know what else I didn’t feel?  Yucky.  And that is exactly how I end up feeling any time I’ve played the damsel in distress.  I feel sullied and stupid, ashamed and pathetic.  I didn’t feel any of that this time.  It was a totally new, positive and uplifting experience.  In more ways than one this total stranger unburdened my ass.

i am. god is. we are. as soon as i write something about me i change, am different, evolving. i am trans. i am a parent. i am a partner. i am a human. i am attempting to live a well-lived life in the spaces in between, beyond definition, fluid, dynamic, omnifarious and always changing. hopefully growing.
View all posts by halitentwo →
This entry was posted in everyday stuff, in the spiritual realm, no man's land. Bookmark the permalink.

3 Responses to your neighbor’s ass