more than meets the eye

I feel a little embarrassed sharing this story, but for some reason I feel compelled to share it anyway:  We recently purchased a new living room couch.  Our old behemoth was a hand-me-down from a friend, a hundred years old (that may be a bit of an exaggeration), and because it was also a sleeper, weighed 2 tons (no exaggeration there).  I remember distinctly (since it was so traumatic) the 3 burly moving men from that horrible moving company struggling mightily to get that mother-of-a-couch up those winding stairs to begin with.  I couldn’t imagine how it was going to get back down.  We let friends know we were getting rid of it and put it on Craig’s list.  I told Emily that no matter who ended up with the couch, they had to know up front that it was a heavy mo-fo and that the responsibility to move it was theirs.

A student from the rabbinical school Emily attended contacted her about the couch and set a time to come pick it up.  The only time they could come and had a truck, however, was at 9:30 one night.  It was unfortunately a night Emily was working late, so I would be home alone with the (God-willingly) sleeping girls.  I knew the rabbinical student was in her 20s and that she was bringing friends to help, but I had never met her.  I made sure she knew I was old and out of shape and would not be helping with the actual, literal heavy lifting.

They arrived in separate cars.  The student, her partner and a friend in one car and another friend driving an open bed pick up truck.  I guess I forgot what 20-something looked like.  Man she looked so young!  Not to mention the fact that she was about 5’3″ and angular (I believe that is the correct way to say scrawny and not so strong without apparent judgment).  Her partner, a slightly shorter, pudgy (I believe this is a nicer way to say doughy or not at all strong without apparent judgment), soft-spoken person who looked to be about 11, of indeterminate gender, was very friendly and had really beautiful energy.  The friend riding with them was about 5’5″ and looked a lot like Opie had just stepped out of Mayberry.  Who also was very friendly and had lovely energy.  The person driving the truck looked equally young, but somewhat stronger than the others, more classically butch and I wondered whether this one was on T.  And of course immediately began to compare my masculinity against theirs, completely unexpectedly and unconsciously.  And needless to say, not measuring up on the manliness meter.  Fodder for another post no doubt.

Anyway, once I slapped my theoretical wrist for comparing and not focusing, I got the sinking feeling that these 4 kids were in no way going to be able to budge (never mind move down a long winding flight of stairs) this sleeper sofa.  Man how I wished Emily were home.  But they bustled by me without seeming concern (get outta my way old man, we’ve got a job to do) and got right to work.  Lanky rabbi student made 4 trips up and down the stairs with cushions while the other 3 secured the sleeper part so it wouldn’t come flying out mid-move.  Then they lifted that sucker like it was a loaf of bread, turned it expertly on its side and eased down the stairs with nary a grunt.  I stood stunned, still in the living room.  They not too loudly whispered, “Thanks!” as they hoisted the couch onto the truck, closed the front door quietly and drove away.  The children sleeping soundly through all 10 minutes of it.

Ok, perhaps it wasn’t that completely seamless (they did scratch the stairwell wall a few times), but they did not wake the children.  And given my immediate judgments and assumptions about them, it was pretty close to perfection.  I guess I’ve been thinking about this micro example because assumptions, judgments and knee-jerk reactions have been in the news daily these past few weeks.  Sometimes assumptions and judgments made based solely on appearance are silly and whimsical.  And sometimes, they are deadly.  It’s kind of silly along the lines of cute when you assume a lithe young woman can’t lift and move a couch.  Not anywhere near silly or cute when a black man gets shot to death in his own car at point blank range because ostensibly he might have had a tail light busted, but really his nose was too wide.  What the actual fuck.

Times like these I honestly feel my skin is too thin to survive this world.  The depression that overwhelmed me much of last week, left me feeling completely hopeless and helpless.  I cried myself to sleep thinking about the victims of violence and their families.  I worry about the world I am raising my children in.  I’m ashamed to say I have no idea what to do, how to help, where to even start.  To some teeny, tiny, infinitesimal degree, I do know what it is like to be treated poorly based on appearance alone.  It’s one of the things I write and talk about here ad nauseum.  But treated poorly and killed aren’t even on the same spectrum.  I can’t imagine having that minuscule percent being multiplied by millions.  I’d never leave the house.  Or become a walking ball of rage.

Neither is a very good option I’m afraid.  I know I can make a difference by raising children who don’t mistreat or judge others, who will, God-willing, grow up to help make the world a better place.  Of course I’m doing this as consciously and thoughtfully as possible.  But what can I do NOW to make a difference NOW!?  Not that I have money to throw at the problem, but I have to hope that if all it took was money, someone would have taken care of it already.

I’m doing some reading and some researching.  I’m making sure I am educated and informed.  I’ve joined organizations committed to change.  If I don’t have money to give, I can offer my time.  I’ve joined the local chapter of Black Lives Matter.  There I said I would do whatever small tasks they needed me to do – behind the scenes (I’ve learned that they don’t need more white people taking up space in the front lines, in front of the television cameras).  I am going to attend lectures, marches and vigils in my area and keep myself involved.  And I’ve made the commitment to myself to take a portion of the soap I make and bring it to one of our police stations in the city on a regular basis.  I can’t imagine things are any easier for them during all of this.  I assume they have a chaplain assigned to them, but I also believe you can’t have too many people willing to be a pastoral presence.  So I will offer that as well.  It’s not much, but it’s something I guess.

And I ordered a Black Lives Matter lawn sign for my front lawn. 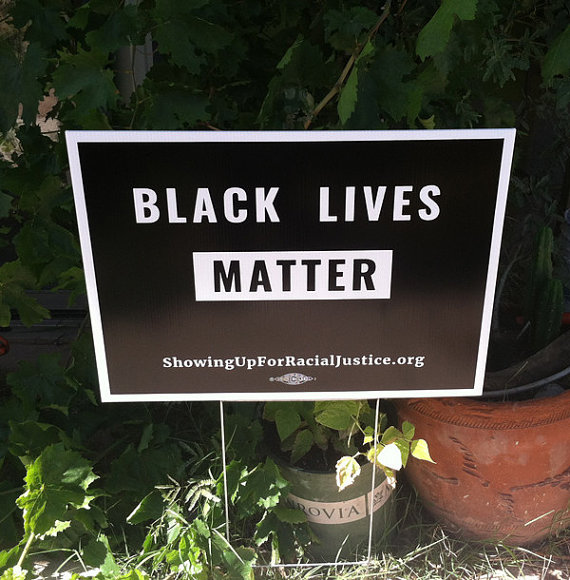 i am. god is. we are. as soon as i write something about me i change, am different, evolving. i am trans. i am a parent. i am a partner. i am a human. i am attempting to live a well-lived life in the spaces in between, beyond definition, fluid, dynamic, omnifarious and always changing. hopefully growing.
View all posts by halitentwo →
This entry was posted in everyday stuff, feelings, no man's land, Uncategorized. Bookmark the permalink.

2 Responses to more than meets the eye