Bet you couldn’t wait to open this post.  But it’s not what you think.  And even though we’ve been over this territory countless times, whether by compulsion or peculiar curiosity, I find myself here once again.  What is it that makes a man?  What is that illusion that I seek?  Where is my Atlantis?  Surely, I just want to be a good human being.  And honestly, the better part of my day is spent intentionally working toward that very goal.  I count my successes by the amount of positive energy I have put into the Universe, by how many times I have seen and acknowledged the Divine Spark in others.  The man part of my brain wants to have wide shoulders and a narrow waist and yes, six-pack-abs and a decent bulge of bicep.  In my 20s I worked out like a veritable gym junkie, pumping away daily, waiting for the results of hard-packed sinewy muscle to begin to rope my arms and shoulders.  Without testosterone coursing through me I ended up with paltry pronunciation in my arms and minimal general gibbosity elsewhere.  But I digress.

I’ve said it before and I’ll say it again, I don’t want to forever be a boy.  I’m no Peter Pan.  But I’m 5 foot 4 and slight of build.  In my opinion, I can’t pull off the men’s suit without looking utterly ridiculous.  I’ve actually had a relatively good summer in terms of clothing, so maybe I shouldn’t complain.  I’ve completely changed from flowing caftans to oxford shirts and chinos at work without much obiter dictum.  Though who knows what whispers linger in the halls as I pass.  Even my beachwear has been noticeably more comfortable for me, without looking too unconventional or outlandish.

The presenting problem this time is that I’ve been asked to officiate at a wedding (of a co-worker’s daughter).  And I don’t have a thing to wear.  Goodness knows {said as I scrutinize the slate grey contents of my closet for the millionth time} I don’t want to outshine the bride.  I’ve gone over this and back and forth with friends and colleagues.  Several have offered to take me shopping.  As if their very presence is going to miraculously engender options while un-gendering my choices.  It ain’t gonna happen.  Even I’m sick of hearing me whine about it.  Maybe I should just give up and go to Milton’s to get a boys’ suit and call it a day.  But I don’t want to look dumb.  {which, of course, makes one wonder why this apprehension didn’t present itself to me when I was wearing enormous fake-African dashikis daily}

Aaaand, back to the point.  In my mind (where I am 6’2″ and burly), a suit is what I imagine.  The problem is I don’t actually imagine my real self/body in those amazing suits I fantasize about.  In addition to the fact that I don’t even have a notion of what I might like to wear, what I might feel comfortable in, not look too stupid in, etc.  Not only am I not very creative, I don’t want to be.  I want to actually look good in a suit.  I can only seem to see the very rigid gendered options:  Dress or suit and tie.  Yes, I like the way Ellen dresses.  A Dolce and Gabbana jacket is just a few thousand dollars over my budget.  And really, figuring out how to spend more money doesn’t solve my problem either.  I want to look and feel integrated, cohesive, whole, complete.

In the meantime, filed under you cannot make this shit up, I went to the dermatologist.  My teen years of baking in the sun (more like frying) slathered in baby oil are catching up to me.  While having moles removed the doctor asked if there was anything that was bothering me – dermatologically speaking.  With my defenses down, I confessed that I’d been privately playing junior dermatologist, picking off (repeatedly) a rough patch of skin on the top of my ear.  With a knowing smile the doctor told me that, “Everyone is a dermatologist in the privacy of their own bathroom.”  And then she looked at my ear, which I’d been complaining to Emily about for months because it was killing me.  To which Emily responded nightly, “I don’t see anything Hal. There’s nothing there.”  Well, the dermatologist proclaimed triumphantly, “Ah yes!  You have chondrodermatitis nodular chronica helicis – commonly referred to as CNH.”  “It’s extremely painful.” she said as she stepped back.  Half of me was thinking, “Told you so Emily!” and the other half of me was thinking, “What the hell is it and is it going to kill me?!”  The dermatologist, more subdued after her initial declaration, bit her lip and explained that CNH is a completely benign, though painful, condition.  Her hesitance?  CNH is a condition common in older or elderly men.  Really!?  I’ve gone from 12 year old boy to elderly man with gross protuberances on his ear in the blink of an eye?  Neat.

Ok, you can stop laughing now.  In the meantime, I missed the Saint Harridan pop up trunk show here in Boston.  Their stuff seems to match my imaginings, though like Ellen’s attire, also out of my budget.  I perused their lines on-line and considered, even though I didn’t get to see anything in person.  So, now I’m considering wearing suspenders and a bow tie for the wedding.  And pants, of course.  It will give me that “formal” look without screaming, “I’m a man dammit!” 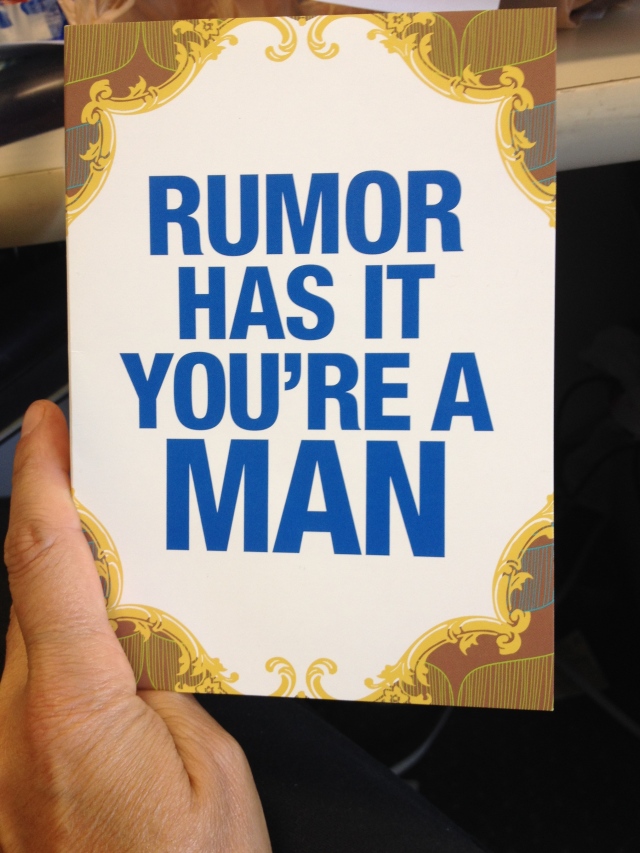 i am. god is. we are. as soon as i write something about me i change, am different, evolving. i am trans. i am a parent. i am a partner. i am a human. i am attempting to live a well-lived life in the spaces in between, beyond definition, fluid, dynamic, omnifarious and always changing. hopefully growing.
View all posts by halitentwo →
This entry was posted in no man's land. Bookmark the permalink.