So, I might have mentioned in a recent post about how my mixed energy allows me into places and conversations that more rigid-gender people might not get to be.  And so it was that I found myself at work the other day having lunch with a group of young straight women, when I was asked to represent and respond for, their version of, men.  D looked at me with exasperation and said, “Why?! Why is it that guys always have to have a nickname?!  I find it so irritating and sophomoric.  My fiance’s name is Gus Carl (an equivalent) and his buddies insist on calling him, ‘Geee!’, or ‘Cahhh!’ Why? His whole name is all of 2 syllables.  What is the need to abbreviate?! Is it supposed to be an abridged version?!  Can you tell me?”  I paused and chewed thoughtfully, buying myself time.  Why is she asking me, I thought nervously.  Then I realized that this is exactly the kind of question she could ask someone like me.  She wasn’t asking me to defend or explain why guys pee on toilet seats.  She was asking me to tap into my guy-ness and answer, what’s up with the nickname thing.

And I realized, I have always wanted and or had a nickname.  Though Peter called me “sissy” fairly often, he mostly endearingly called me “Harry”.  Not so much in a guy sense as in an affectionate sort of way.  And I loved it.  For the first half of my life I didn’t like my given name (more because it was so unusual, made me stand out and made introductions difficult) and for a short time  in college I went by Bobbi.  My middle name is Robyn.  Which sounded too girly to me.  But Bobbi I liked.  I was named for my father’s father who was Rosario.  And I actually spent some time wishing I’d been named Rosario as a kid.  A much cooler name, in my child’s mind estimation, than Robyn, which I saw as prim and prissy.  At any rate, for whatever reason, the Bobbi days didn’t last.  On every sports team I played on I waited for the nickname that would stick – sparky, ducky, moe? – But none did.

When Joita was learning to talk she called me Happy.  When those big brown eyes looked at me, filled with love and she called me Happy, my heart sang.  Finally!  A nickname.  And one that meant so much to me, one that I loved.  Nearly everyone started calling me Happy.  I signed cards, “Love, Happy” and left phone messages that began with, “hey, it’s happy”.  I loved those Happy days.  But as she grew up, she stopped calling me her happy and started calling me her mom.  She didn’t like explaining what a happy was to her friends when most of them had a mom and a dad.  Even the other kids in gay families had actual parents, not emoticons.  So she made the switch and, unless she was really tired, she called me mommie.

So why do guys like nicknames so much?  I guess it’s like, as my dear friend Suzanne has pointed out, guys also like uniforms.  It’s a guy thing.  My dad used this guy thing to his advantage, totally turned it on its head.  My dad knew a lot of people, but he often had a hard time remembering names.  So he used the guy nickname thing as a cover when greeting people he knew whose names, in the moment, escaped him.  As friendly and affectionately and cheerfully as anything, my dad would shout, “Hey Guy!” or “Hey Coach!”.  There was “Buddy”, “Pal”, “Kiddo” and lots of others.  The result of which left people feeling welcomed and connected in a loving intimate and special way.  We used to tease him about it, but really everyone seemed to like the fact that they were embraced by someone who thought they were special enough for a term of endearment.  So, what’s so bad about nicknames again? 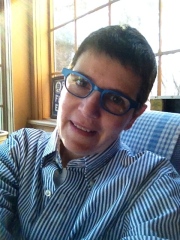 i am. god is. we are. as soon as i write something about me i change, am different, evolving. i am trans. i am a parent. i am a partner. i am a human. i am attempting to live a well-lived life in the spaces in between, beyond definition, fluid, dynamic, omnifarious and always changing. hopefully growing.
View all posts by halitentwo →
This entry was posted in everyday stuff, Uncategorized. Bookmark the permalink.